It is what will come to pass if you should fail.

The Fellowship is breaking, it has already begun.

He will try and take the Ring.

You know of whom I speak.

One by one it will destroy them all.

The Elven queen Galadriel on the fate of the Fellowship after Frodo has looked into the Mirror.

Hello there friends of Middle Earth glad to have you all back again for another week of the Hobbit Hollow Construction Blog.

So it is true. My head definitely feels a lot better after I stop banging it against the wall. But the Jets won this Thursday night….and played pretty well beating the Buffalo Bills soundly. The Bills are pretty good too.  So hope remains…..while company is true. Hey. Maybe the Jets can turn things around in the second half of the season. Who knows? Now all I have to do is patch the hole in the wall in my living room.

Hmmm. Maybe I should wait till the season is over. Why practice patching holes in the wall. Ya know there’s going to be at least one more hole by the end of the season. It’s the Jets remember?

So I get home the other day and walk into my bedroom to find this.

So yeah. What the heck is going on with this picture? I was wondering the same. Turns out the Editor got a bunch of smokey 20’s. Like they really stunk of cigarette smoke. Bad. At least as far as the Editor was concerned. She actually put the money in the washing machine. Small load permanent press setting. This was taken during drying mode. You never put your money in the dryer. Especially 20’s. Jackson’s face gets distorted at high heat. And an arrow appears through his neck. Google it. It’s true.

So in other non blog related news the college boy came home. Just for a little r and r and to put the dorm room beind him for a day or two. It was nice seeing him.

It was really nice seeing him.

So  a few items of note. I had the Mitsubishi heat pump installed this week. Pretty awesome. It’s working like a charm. Check it out.

So this does heat and cooling for the Hobbit house. Hobbits love their creature comforts. Staying warm in the winter and cool in the summer is crucial. It’s a lot bigger than I thought it was going to be. It’s on a pedestal so that snow won’t interfere with it operationally.

It’s weird but I had the temperature in the house set at 62 degrees Fahrenheit on Saturday. It felt like an oven inside the house though. So oven like that I thought the unit was actually malfunctioning. It was around 50 degrees outside. It felt like 80 degrees inside though. I shut the unit off.

When I first heard about Passive House I read an article stating that you don’t need to heat your home nearly as much because there are no drafts and the house retains heat so well. Therefore you can live in a Passive House with a much lower setting on your thermostat. I think this is true. I actually brought a thermometer into the house to check the temperature on Sunday. Really just to make sure that the unit was  working properly and that it wasn’t overshooting the temperature I had set on the thermostat. It stayed at 62 degrees the whole time. I was sweating while I worked on the electrical. Pretty cool.

So  Terence and Ethan came over to help me with a couple of things. One of which was finishing off the walkway path up to the roof. Not that we finished it but I had them top off the walkway with gravel . This way in the spring I’ll be ready to go with the bluestone I want to use for the path. Here they are having at it.

It’s not that steep but it’s still takes quite a bit to get a wheelbarrow up this slope.

The other item we took care of was cleaning out the garage. My excavation guy should be here in a couple of weeks to demo the garage. Got to get the minor stuff out of there. There was actually quite a bit. It took most of the afternoon to get everything organized.

Gotta come up with a good garage design. I wonder what kind of car a Hobbit would drive? I kept a gang box and saved the extra styrofoam I had. 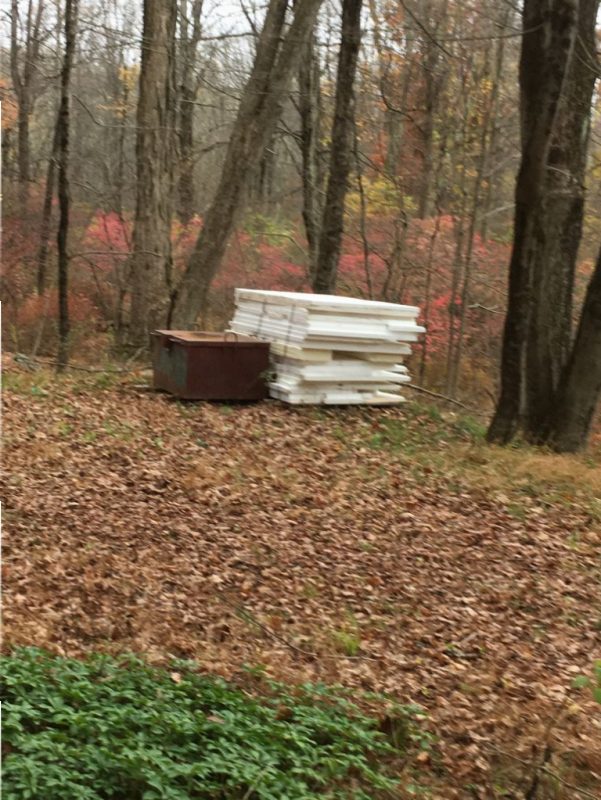 Going to use the styro under the slab for the shallow frost free design.

By the way the stone mason is supposed to start Monday weather permitting. This should be interesting. Kind of nervous about the stone to be honest. It’s such a big deal and you really don’t know how it’s going to look. It’s also really hard to describe what I want. Keeping my fingers crossed.

Oh yeah. I put an addition on the house on the other side of town for my Mother-in-Law. So she can stay over after she cooks for us. It’s nice. Check it out.

I think she can fit in there. It just gets a little smokey when we turn the pellet stove on. I don’t think that will be an issue though. She used to be a smoker. The bird’s had no problem raising a whole family of four in there over the summer. There’s only one of her.

The only issue that I can think of is that the money she owes me for my overpayment for dinners is that the cash might smell a tad like a fireplace. Hmmmm.

No worries. I’ll throw it in the wash!

Have a great week!