Hello again fans of Middle Earth and others interested in the ways of Hobbit house construction. Welcome to the continuing saga of Hobbit Hollow!

The media. It’s really insane. I’m just so glad that it was a nice day today and was able to enjoy the great out of doors with the Editor. Otherwise I might have subjected myself to the 24/7 coverage of hurricane Irma. I mean I do feel bad for all the people who are directly affected by the storm. Hurricane Harvey survivors as well. But good God can the media report on anything else besides the storm? It’s as if the whole world is on standby until the hurricane peeters out. I mean how many shots of a reporter in a raincoat getting rained on can one take? “It’s raining now! Watch out for coconuts! They can become projectiles!” Didn’t like 6 million Floridians evacuate Florida? The chances of a coconut hitting a reporter were probably a lot higher than for hitting anyone else. I mean it would have been pretty cool if they had coverage of flying coconuts smashing into high rises or something like that. Or even if a reporter had to dodge a couple of flying coconuts. Now that would have been interesting. I know what it’s like to be in the rain though. Not that big a deal. Wasn’t there a huge earthquake in Mexico? Like a really serious 8.2 on the rickter scale earthquake?

I don’t know. I guess it’s just me. I do hope the damage isn’t similar to what happened in Texas though. That wouldn’t be good.

Say some prayers for those affected.

So on another note ( And I know I’ve mentioned this before.) I’m not a very good maintenance guy. You know. House maintenance. For instance I have a water softener and I forgot to fill it with salt for a month. Or two???? I forget. You  get the gist of it though.

But there are some things that should not be forgotten. It’s not that I had forgotten. It was never really far from my mind. It’s just that I am a bad maintenance guy. That’s all .So yeah I forgot to call the guy to clean out my septic. Okay!!!!  It’s not really that big of a deal. Unless of course you’re my Father -in- Law who has his septic pumped twice a year. I did wait quite a while though. Seven years to be exact. Okay so it’s a while but if you  know anything about septics you would realize that the micros in the septic system actually break down and quote  unquote eat the bacteria. Therefor a septic system that has the right stuff going into it is actually self sustaining and actually never needs to be cleaned. (We have the right stuff going into it okay people.) Tell that to my Father-in-Law. Believe it or not he says to the Editor, “I was wondering when you last had it cleaned.” Who worries about another guys septic????

Actually I was kind of worried. I’ve been waiting for that horrible phone call from the wife. You know. Oh my God that septic is backing up into the House!!!!!!!!!!!!!!

I figured I better get this thing cleaned out before the winter.

It was kind of funny. I had Jude uncover the septic tank opening and put the dirt in a wheelbarrow. The guy from the septic tank cleaning service called my wife outside after  he finished up. He knew. “How long has it been since you had your septic cleaned?” The Editor plays it cool: “I really don’t know.” Then he says, “It was kind of thick.”

But were starting off the Fall season with a freshly cleaned tank!!! Woo Hooo!

That took a bit longer than anticipated. Sorry about that.

Gotta pick up the pace. I actually have to wrap this up now.

I started the electric this week. I’m trying to do one room of lights per weekend. This way when it gets cold and dark out I can work on the inside. Check it out. The high hats I cast into the concrete ceiling work!

Guess what? That picture didn’t make it into my library. I’ll show you next week. I did put the final layer of styrofoam on the front of the house. This is now the ultimate thermal bridge free house. If you don’t remember hopefully next week I’ll try to enlighten you to thermal bridge freeness.

A couple of pictures. 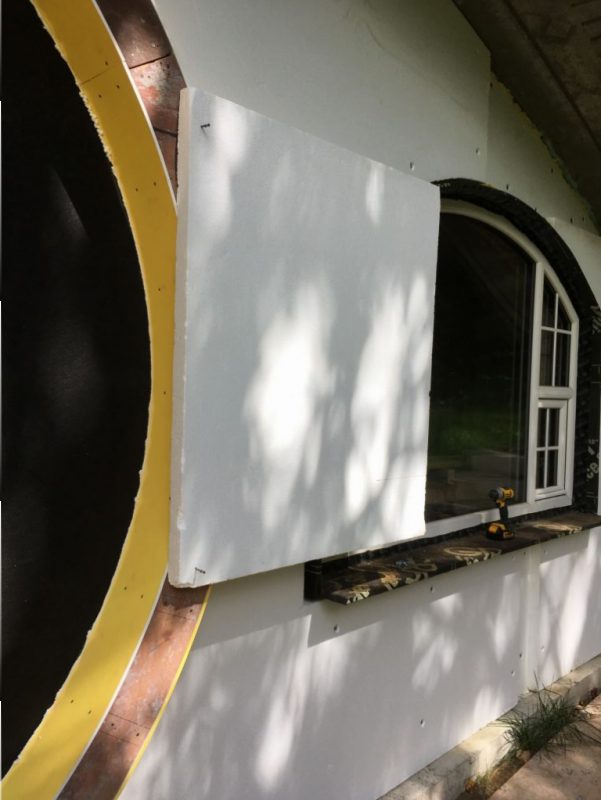 This is how I scribed the insulation to fit the wall. In this instance anyway. 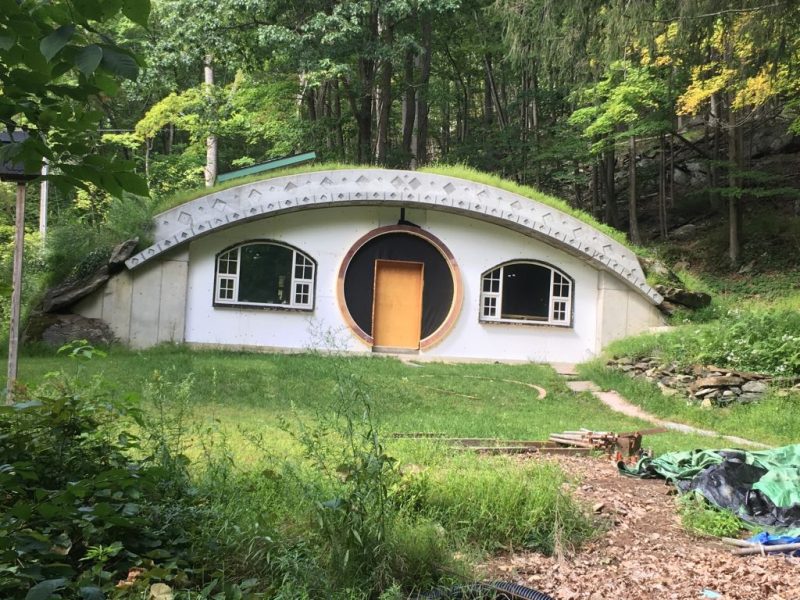 Have to put one more piece above the door and we’re done.

2 thoughts on “Of Thermal Bridges……It’s a Little Thick”