Welcome friends of old and strangers from distant lands. Glad to have you back for another edition of the Hobbit Hollow Construction Blog.

By the way. Had a little problem with the comments section as of late. Our man Jason Bajor took care of things though. Thanks buddy. (I really should have him over and take care of my computer.) So comment away if you will.

A few unrelated items before we get into the nuts and bolts of Hobbit house hallways. As per usual.

So let’s be honest. We all have to work for a living right? I mean we set our alarms at night, sleep, alarm goes off, get up and go to work. Repeat till we retire. Hopefully. Okay so sometimes it doesn’t always go that smoothly. Sometimes you don’t even know what happened. Like the other day. I just overslept. I mean I don’t even remember my alarm going off. Maybe it didn’t. Maybe I forgot to set my alarm. Who knows? The point is the order of events got messed up. But there is this thing that happens every morning that runs like clockwork. You know for the most part.

So lets back up. I wake up, typically,  at 350 put my coffee on and go brush and shave. Ethan and Jude wake up a little after four and begin getting ready.  We somehow all manage to meet in the kitchen around 415 to put our lunches together. So this happens every day. So if I wasn’t there at 415 putting my lunch together with you wouldn’t a warning flare go up  in your mind like, “Where’s Dad?” So what question do you think went off in their minds. “Hmmm. I guess Dad is out at the pool?” Are you serious? That’s what they said. So they never came into my bedroom to wake me up.

Ethan comes into my room at 425 and wakes me up out of a sound sleep.  He says, “I was wondering where you were. I thought you were out at the pool.” Yeah. I was taking my early morning dip. Grrrrrrrr. Jude was probably sitting in the car trying to fall back asleep. Later on he says, “Yeah. I was wondering where you were too? You weren’t out at the pool???” The other day Ethan missed his alarm.  I asked Jude to go wake him up because I didn’t hear any activity upstairs like I usually do. What does Jude do…..he gets his shoes on, sweatshirt on, backpack on, stuffs his lunch in his backpack, fills his water bottle up. I look up and realize he hasn’t woken his brother up yet and I almost started yelling. Jeez. Take two seconds to wake your brother up so we can all get going please!!!!!

It’s like what the hell is going on here people!

On another note son Terence went to the rock bound shores of Maine with his friends for a few days. They had a great time.They actually caught a few lobster as well. He did pick up a few lobster on the way home for all of us and we had lobster the other day. They were really really good. They didn’t even need butter that’s how good they were. He got one for that Mother-in-law of mine. She couldn’t make it for our little  lobster fest so he brought them over to her house so she could pick one out. She looks into the ice filled cooler with all the lobsters in it and says, and I’m not making this one up here people, “Which one does your father want.” Can you believe it???????

Believe it. I didn’t get the pound and a half lobster.

Let’s move on Jim before you lose the few followers you still have why don’t you.

So the main event this weekend was to try and get this circular hallway framed. I picked up everything Friday night on the way home so that I would be ready to rock and roll so to speak. Before I could get started on that I had to build a small elevated floor above the circular hall so we would be able to work on the mechanicals later on in the project. You know plumbing, hvac, and the like. It was really easy actually. I framed everything out of 2×6’s. I set it up with a carrier on both of the existing framed walls and then used Teco hangers to support the joists. Check it out.

Let me show you what a Teco hanger looks like in case you don’t know.

You use special nails to nail the Tecos in place. They are heavier than most and I think only 1 1/2 inches long. They’re for shear. Then you nail 10p commons in on the sides. It’s a pretty good system but it’s tricky getting it right. I nailed everything up first and then nailed the Tecos on later. It’s easier to align the 2×6’s this way. You’ll get what I’m talking about if you ever have to do it yourself.

The next thing I did was build and secure a little knee wall on either side of the hall. I cut all the studs using a little stop I attached to the chop saw so that every stud was cut the exact same size.

Once this was  completed I was able to start installing the studs around the perimeter on the circle one at a time. I had the layout already drawn out on both sides. So I used a scrap piece of plywood screwed to the line to hold the 2×4 in the right place. Once I laid the 2×4 onto these scraps I screwed them in flush with the circular template. After that I nailed them off with two 10 penny commons. Here it is at the start.

I did about half by myself and then son Terence showed up and gave me a hand. It went pretty fast after that. You can definitely motor with another set of hands helping you.

Once this was completed it was time to put the plywood on. I used 3/8 BC plywood I got at Home Depot. It worked really well. The first sheet was a little tricky. Aligning it to the edge and all.  Once we got it it was pretty simple. One guy pushes the plywood down with both hands while the other guy  screws it in place. Working horizontally people. One stud at a time. I forgot to take a picture after the first sheet was in.

Ran out of plywood for the finish. I’m also going to double up on the plywood. I think doing this will make for a good base to nail trim and sheetrock to without having to hit the studs. a few more pictures for the road. 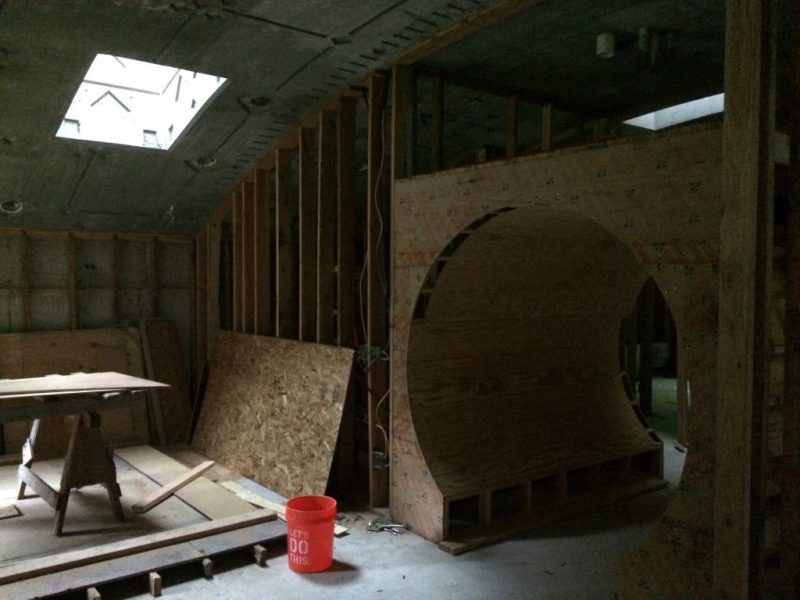 I wanted to make the hallway longer. To bad I had to keep the house on the original footprint of the original house that was on the property. You would really get the tunnel effect if it was another 2 to 4 feet longer.

Have a great week and enjoy your 4th of July!

2 thoughts on “Hobbit Hallways Part 3…..Which Lobster is for Your Father?????”