“One does not simply walk into Mordor.

Its black gates are guarded with more than just Orcs. There is evil there that does not sleep.

The Great Eye is ever watchful. It is a barren wasteland filled with fire and ash. The very air you breath is a poisonous fume.  Not with ten thousand men could you do this. It is folly!”….Boromir on the task before the Fellowship.

For the grouting of the hallway slate must be done. Its great crevices run deep and untrue. The pockmarks, the dips the dings all must be free of any trace of grout. One does not simply trowel in some grout and walk away thinking the job is complete. No. Not with the Editor, Terence the Brave, and Georgia the Stout could we get this done. Hmmm. Well we kinda, sort of got it done. But the next day I didn’t like what I saw. We’ll get into that later. Definitely the toughest grouting job I ever did.

So welcome once again to the Hobbit Hollow construction blog. Fall is in the air and the beauty of the colors is now upon us…..I was just remarking to the Editor the other day how this magic appears every year. It really is amazing how one day you wake up and there is this different kind of beauty all around you. There are moments when you are completely awestruck.

Still a lot of green in this picture but if you notice the yellow on the ground are not leaves but a carpet of pine needles.

So last week I realized that we are not going to be able to proceed without cleaning up this mess. I mean there is stuff everywhere. I still haven’t stripped the skylights and there is a ton of additional miscellaneous stuff on the roof as well. I had to order another container. I got a 20 yarder for the record which was more than enough. I spent Saturday stripping the balance of the skylights and then throwing the material off the roof. What a mess I made. Check it out.

Not really a good picture of what was there. Off to the right were two huge piles of debris that were twice as big if not bigger than what you see here. It’s amazing how much waste there is. But in our case debris really does control the job because if we don’t clean up we can’t get our excavator friend in there to back fill our little old Hobbit House and that’s what we are shooting for by the end of November, if not sooner.

So I met with Steve from Landworks Excavating Sunday and went over a bunch of things that I want him to do. I mean this is like really, really, exciting now. Yes, my friends we are finally going to see the real thing. A Hobbit House that is underground and that you can live in. Awesome. Truly awesome. I also want him to give me a price on fixing the driveway. I have a really great idea for the driveway which will make it easier to plow in the winter and which will also  make parking and exiting a lot smoother. I mean we’re going to have a lot of people coming up for the tours of the house so streamlining is an issue. Just trying to think ahead here people.

One of the other things I did was finish up the Mira drain on the roof. Hmmm. For the most part. I had to leave a couple of spots out for various reasons that I won’t go into here. But this is really the final step before backfilling. In reality I think I have two more days work to prep for backfilling. Just minor odds and ends but odds and ends nonetheless. Terence has a Friday night game next week so I’m hoping to get those things done next weekend if possible. Here’s a shot of the roof with the Mira Drain complete.

So like I was saying “debris controls the job,” but the reality is there is just a lot of stuff to pick up and walk into the container. Doing this by yourself is brutal and can really get on your nerves after an hour or so. So I pressed Terence into service and guess who also showed up to make a guest appearance. The Editor! I actually had to rub my eyes for a moment. I thought I was seeing things. Yes, the Editor showed up with work boots and all….and gave us a really good shot in the arm I might add. It took the three of us about an hour to fill the container.

So, least I forget, about 45 minutes into debris control the Editor has a shoe malfunction. The sole on her boot falls off. Okay, yeah it’s kind of hard to believe. I mean I’ve been working in construction for over 30 years full time and I think that sort of thing maybe happened once to me. Just prior to this happening I hear her mention to Terence that she’s getting tired. But I’ll give her the benefit of the doubt. Hmmm.

The next words coming from the Editor were along the lines of, ” I can’t go over there with my shoe like this!!!” Ah, we were almost done anyway and she got me a frozen Dunkachino from Dunkin’ Dounuts afterword. That was nice. (Editor’s Note: I did NOT tamper with my boot prior to arriving at the Hobbit House. No matter what Terence says! Let the record show that I stayed and finished the job with one sole-less boot! )

Here’s a shot after the clean up.

It’s going to be a really nice front yard!

Oh yeah, I almost forgot to show you this huge mushroom I found. It was so big that it had fallen over so we were able to pick it up so you could see it’s size.

So we’re almost ready for backfilling. Hopefully I’ll be getting a price early this week from Steve. I think I’m gonna go to church and pray for a good price. Hey, you never know!

So just finishing where we began. The grouting. So this tile has nooks and crannies like I’ve never seen before. I knew it was going to be a pain  in the you know where to grout this stuff but I didn’t think it would be this brutal. I broke out the grout bag thinking I would just try and fill the joints one at a time. Yeah, right. I guess I don’t know how to use a grout bag because after about 5 seconds of grout bagging I threw the grout bag out. There was no way I was going to be able to do it that way. So I went back to traditional grouting. Pour it over the floor and use the sponge float to pack it into the joints. Done with that in about  a half hour. As soon as I started I knew I was in trouble with the clean up. It was all hands on deck as soon as we were ready to start cleaning the grout off the tiles. I keep calling them tiles but they really aren’t. It’s natural stone. So it’s like this: Just imagine you just toasted an English muffin and you put butter and jam on it and then someone told you that you have to get the butter and jam out of the nooks and crannies. Well that’s sort of what we had to do here. Get the butter and jam out of the nooks and crannies. Like I said all hands were on deck. I was panicking a little and I’m not sure but I might have been foaming at the mouth as well. I was definitely incoherent because everyone at one point was making fun of me and my ramblings. Apparently I said: “So what you have to do now is clean each individual tile individually one at a time!” I guess I said something along those lines more than once until everyone’s ears were ringing. Here they are having at it.

I’m sure the Editor is going to add to this but needless to say we got through it. (Editor’s Note: No. You pretty much covered it. Maybe you didn’t quite nab the intensity of your sheer panic as the grout set on the tile but that would be hard for even a seasoned writer to accomplish. And I love how Terence looks in the picture. That sums up how we were all feeling. Except Georgia.)

Usually the next day you just buff the tile with a rag but this stuff with it’s nooks and crannies was going to be a bit more labor intensive. We used steel wool and a wet rag to get the balance of the grout out of the nooks and crannies. I found myself  trying to get the butter and jam out of my English muffin before I realized what I was doing and just ate it. Yum! Yum!

Anyway, things are looking up here people. I’m really hoping to close this place in for the winter before the winter!

Thanks for stopping by and take care!

PS: I began updating Hobbit Hollow in Pictures if you care to take a look.

PPS: Went for a drive with the Editor to take in the fall colors. 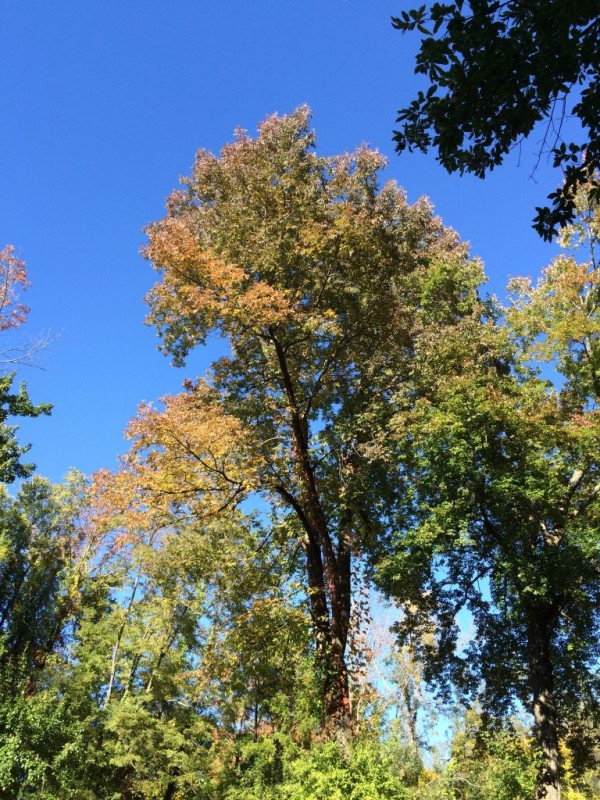 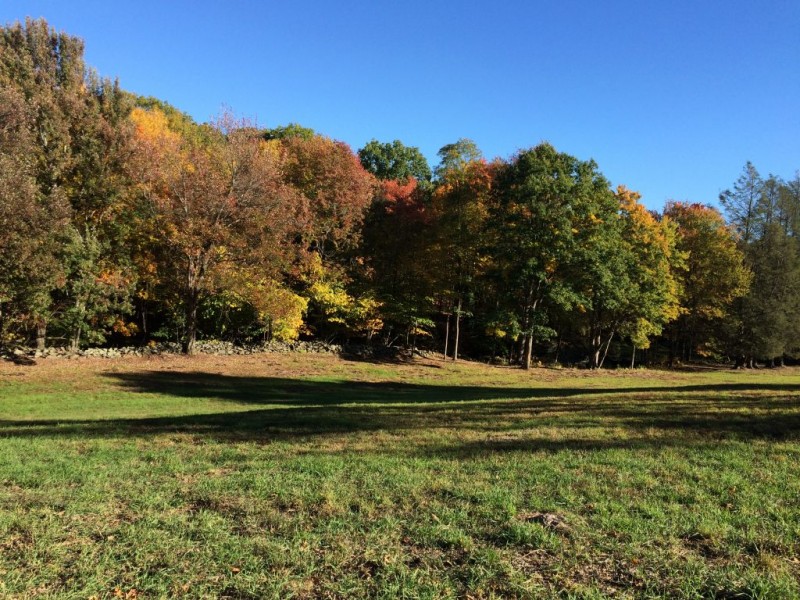 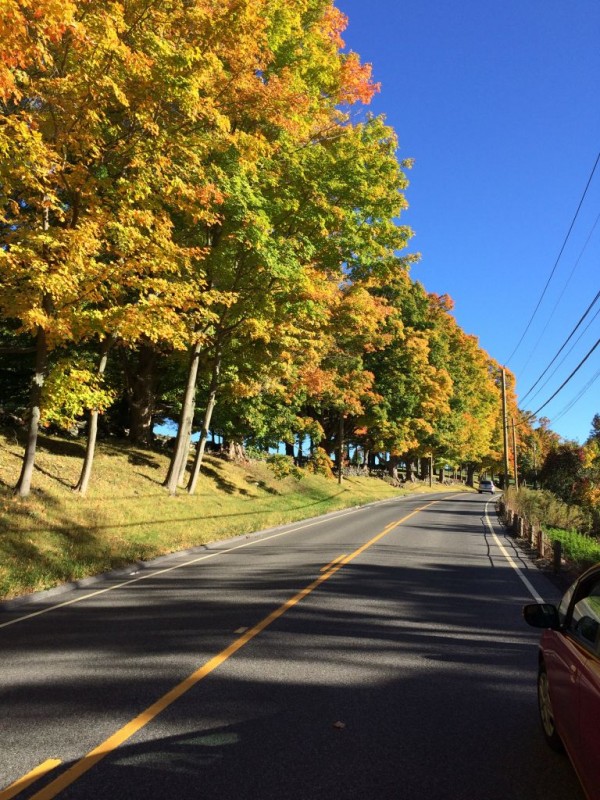 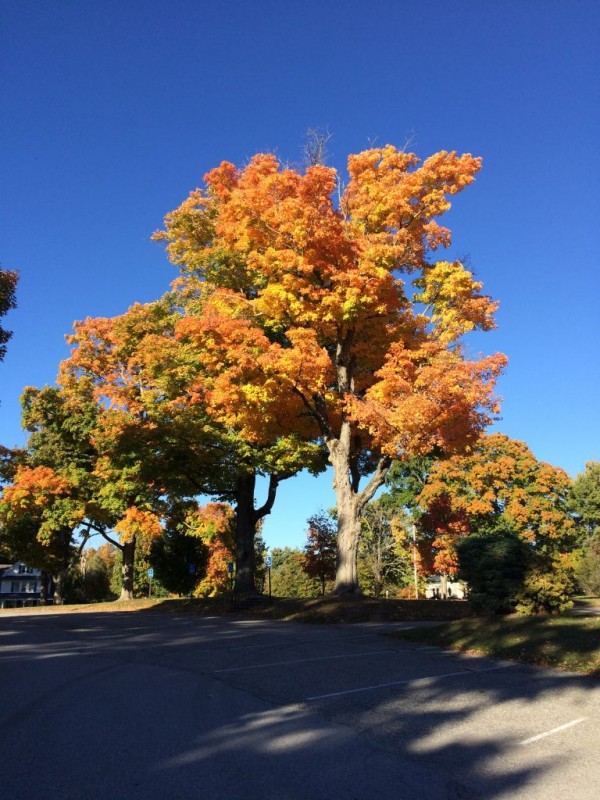 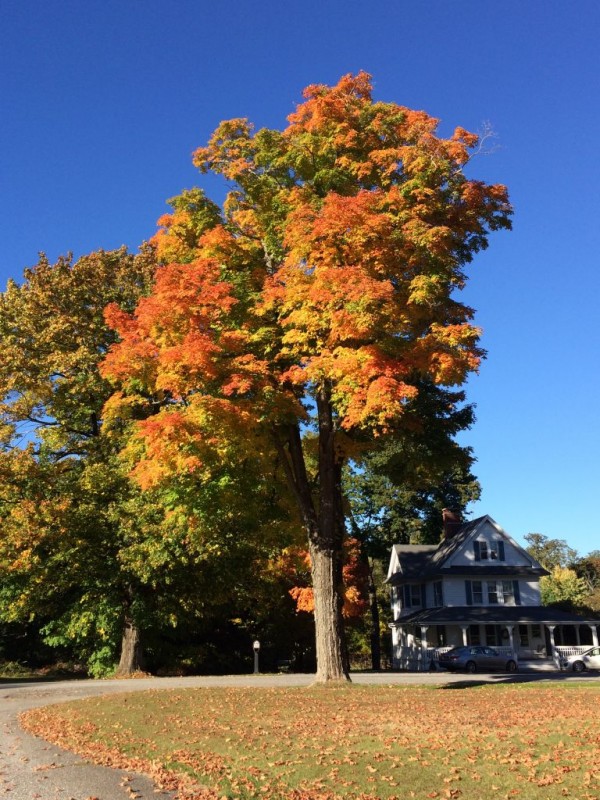