Welcome back free folk of Middle Earth! Glad you could make it for another addition of the Hobbit Hollow Construction Blog. It’s always a pleasure.

Okay, I’m just gonna be a little honest here and let you all know that I really don’t know much about blogging and the social media stuff. Actually I haven’t a clue about social media. I don’t read any blogs so I’m really not too sure how many people are reading this blog regularly or if people just skip around or what. My wife tells me most people check in and read every once in a while and “catch up” on a blog. So I wanted to briefly talk about something that was in the last blog post and kind of reference that. So if you haven’t read the last blog post and the associated comment I received you might want to skip this next paragraph. Also, there will be a couple of Lord of the Rings references that might go over your head so to speak.I hope you all know that there’s nothing anyone can do about that at this point….so let’s get to it shall we?

Okay, so last week my son was viciously attacked by the largest member of the bee family in North America! Poor kid, the trauma of it all. Terence the Good will probably never be the same. But he shouldn’t be traumatized because alert blog post commentator Sally H. clued me into the fact that what I’ve been calling a wood bee my whole life is in fact a carpenter bee! And they’re harmless! Sally also left an interesting link about the species which is quite interesting….if you’re interested. Anyway, I got to thinking, Sally H. is kind of like our Marlin Perkins from the old Mutual of Omaha’s Wild Kingdom days. (I’ll bet most of you haven’t a clue what I’m talking about. I’m old, Gandalf .) Thinking again for the current generation, she’s really like our Radagast the Brown. A female wizard in tune with the currents of nature. It’s always good to have a wizard on your side. Lord only knows I need all the help I can get. Anyhow I have carpenter bees at home eating my shed. Check out the number they’re doing on this fascia board.

Anyhow, thanks Sally for your input.

Also on a personal note Mike D. stopped by the house to check it out before he moves to Florida. Mike is a very old friend of mine from the second age of Middle Earth. I want to say we met in fourth or fifth grade. Anyway, Mike stopped by and bought the crew lunch. He didn’t know it but I told everyone to order the most expensive items on the menu. I had the chateaubriand to go with a creamy bernaise sauce on the side. Very tasty. We rounded out the order with steak and eggs, a New York strip steak with the Portobello mushrooms and a fine bottle of wine. Who new lunch for the crew was gonna cost $500 dollars? Mike was a good sport about it though. We had a couple of laughs and Mike got a taste of working on a Hobbit House. It was nice having a new face at the house. My kids all thought he was great.

Then Jodi called and said we had no hot water at home. Now that the heating season is over none of the heating oil suppliers are running trucks on the weekends. What a bummer. My fault though, as usual. I’ve been meaning to call for a delivery but just kept putting it off. So we called it quits and I had to go get some diesel and fill my tank up a bit.

It was really good to see Mike though. Best of luck in Florida!

Ah yes, a Hobbit house. Where were we? Hmmm. Where shall I begin?

Well I’ve kind of been chipping away at a bunch of small stuff that doesn’t seem like much but is relevant nonetheless. One item that’s been bugging me is access to the roof. I tried setting up a step ladder to get to the east side but it just wasn’t working right. I knew I had to make a site built ladder from 2×4’s and secure it the right way. It’s safer and it will make getting around a whole lot easier. The main thing when you build a ladder like this is you have to install cleats to support the rungs of the ladder. Once you put these in an elephant can walk up one of these. I also extended the rails a couple of feet so you have something to hold onto when you’re going down the ladder as well. Check it out.

Last week Jodi and Jude installed some of the detail blocks on the roof. I noticed that some of the bigger ones weren’t conforming to the curvature of the roof. This is a problem. If the blocks don’t get screwed tight to the roof, concrete will get underneath them during the pour and when we strip the forms it won’t look good at all. So how do we remedy this condition? Basically what you have to do is back cut the diamond so it will bend and conform to the curvature you are screwing it into. Here are a couple of pictures of how I did it.

Once this is done you’ll be able to bend this block and screw it flush into the roof deck. Bada Bing Bada Boom!

There were a bunch of other small items I completed but none worth mentioning here.

The one thing I did want to mention was something I noticed Saturday morning before anyone else got there. So I’ve talked about thermal bridging and how it’s such a big part of passive houses. Just a recap: A thermal bridge is a way temperature travels into a house either hot or cold. That’s not the real definition but I’m trying to keep this simple. Thermal bridges are our enemy if you will. A good passive house has no thermal bridges whatsoever. Anyhoo, I was up on the roof and you could see the outline of every 2×4 stud underneath the roof. The 2×4’s underneath the sheathing were retaining the overnight chill so they were transferring their coldness to the plywood sheathing above. As it was warming up outside the plywood was drying from the morning dew but where the 2×4’s were the condensation remained because it was keeping the plywood colder at that location. Am I making any sense here? Take a look at this picture. It’s worth a thousand words.

Are you kind of sort of getting it? That’s what a thermal bridge is. Every house in America is basically loaded with thermal bridges and it’s costing us probably billions in heating and cooling dollars every year. So every single stud on the exterior of your house is “bridging” the outside temperature into your house. Be it hot in the summer or cold in the winter. We’ll be talking about thermal bridging more as we proceed. And don’t hesitate to write if you don’t get it.

So believe it or not we never really finished nailing off this roof deck. I wanted to make sure everything was nailed off before we started any additional detail work. This is important for a couple of reasons. First and foremost it finishes the connectivity of the supporting structure before the pour. In other words, this sheathing is now all tied together and is acting as a single unit. For those of you who might live where hurricanes hit one of the big reasons for roof failure in a hurricane is the lack of proper nailing by the roof installer. Now we are not building for a hurricane here but we are going to be experiencing a lot of stress from the weight of the concrete we are going to pour. Everything should be tied together properly. The other reason is nailing every stud gives us a much nicer finished surface and that’s important.

Georgia and Ethan came home for Easter and they were able to stop by and give us a hand for a couple of hours. That was real nice. They both had errands to run but wanted give their dear old dad a hand too. Georgia helped Jude with routing and Ethan worked with Terence putting together the last three retaining curbs. Here they are having at it!

I, for my small part, began laying out all the partitions for the rooms and hallways in the house on the roof structure. This is actually a little trickier than you might think. This being a curved Hobbit roof and all. So why must  we do this? For a number of reasons. All of the ceiling light fixture boxes have to be encased and wired into the concrete slab. We’d like  to put the dining room light over the dining room table right? Also the wiring for these fixtures has to come through the ceiling where a stud wall is. The last thing we need is to have a wire coming throught the ceiling in the wrong place. The other reason is the skylights  have to be located in specific locations which is critical and lastly, all our ceiling detailing has got to be located properly. I pretty much worked on this for four hours.

Well it was time for a lunch break and I was licking my chops for that chateaubriand!  Here’s a picture of Mike with the crew.

Don’t worry, Mike is like a big executive at Verizon. He’s got deep pockets. If you mess with him he’ll cut off your phone service for like the rest of your life. The kids say thanks for lunch and good luck in Florida! Maybe we’ll be done with the house by the time you get back.

After lunch Georgia and Ethan had to go and Mike stayed and helped me put the balance of the retaining wall curbs in. We had a couple of laughs and then I had to go fix my boiler situation. We did get the curbs in place and are now ready for skylight installations! Oh yeah! Here are a couple of pictures of the curb fully installed. 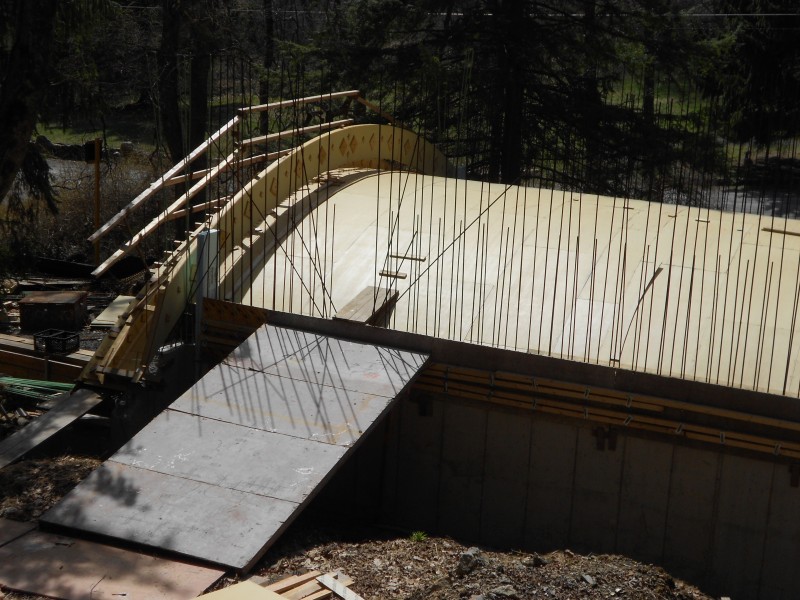 Well thanks again Mike and Sally for  your continuing support. I hope your Easter was enjoyable!

Putting up the crane in Rego park Queens this week. I’ll try and take a picture of this crane base, it’s most unusual.

Just one other item and this one is for Sally H.  I found this outside of my house Sunday morning. There was an extremely large pair of  animal tracks coming and going from this location. Maybe you can help me identify the critter who left it!

Any ideas Radagast the Brown?