Welcome free folk of Middle Earth to yet another installment of the Hobbit Hollow blog. Well this will be a rather short installment. The weather is definitely not cooperating with the construction of Hobbit Hollow. I don’t know if any of you remember but during the fall of 2013 my wife and I sought out the wisdom of the wooly bear caterpillars for guidance and a one up if you will on the upcoming winter. That was some sort of old Indian forecasting tool. That’s probably one of the reasons the Indians are no longer around.

I won’t blame it all on the Wooly’s but that being said they are a rather easy scapegoat. ( i.e. This horrible winter is all the wooly bear caterpillars fault!) So if you run into a Wooly can you please ask him/her what the heck happened? I mean this has got to be the coldest winter ever. They’ll probably give you some lame answer about climate change or something to that effect. Like Gimli said “Never trust an Elf!”, I say, “Never trust a Wooly!”

Just going out of sequence here I found out on Tuesday what hell is like. Hell it turns out is not hot. It’s actually freezing cold….And the entrance to Hell is the Macombs Dam Bridge exit off the New York State Thruway right before Yankee Stadium in the Bronx.

It’s a long story so I’ll just give you the highlights.

It started to snow around 7:30 AM Tuesday morning. That’s never a good thing but the weatherman had said it wouldn’t start till 12 noon. Why do we keep listening to weathermen? I think everybody working in New York City thought that the real storm was going to start later in the day. So we all had a relaxed attitude about this storm.What a horrible mistake. Thank God I had the truck and had gotten a full tank of gas that morning. I left work at 2:30 Pm and started what I already knew would be a long trek home.

I couldn’t believe it. I was actually making good time through Queens heading into the Bronx. The traffic report was filled with horror stories all over the city of people stuck in horrific traffic jams. I couldn’t believe how good I was doing getting home….and then the Thruway started to slow down. To a crawl, but a crawl nonetheless. If I had only stayed on the Thruway. But me being me I tried to outfox this storm and tried to take the sidestreets of the Bronx. What a mistake. At one point I was at the same intersection for at least a half hour. It was the first time in 28 years of commuting that I didn’t think I was going to make it home…and that I’d be sleeping in my car on Sedwick Ave and 180th street. That was hell. Almost 5 hours to get home that night….and some other people had it worse. It was right out of the movies. Like when the Cape Cod Potato Chip truck almost crashed next to me going the wrong way down the service road. Hell is chaos in the Bronx. I’ll leave it at that.

Didn’t get much done at the Hobbit House. I actually worked a couple of hours on Martin Luther King Day. I started the spandrel extension on the front of the house. I think once it’s poured it’s going to look really nice. Check it out. 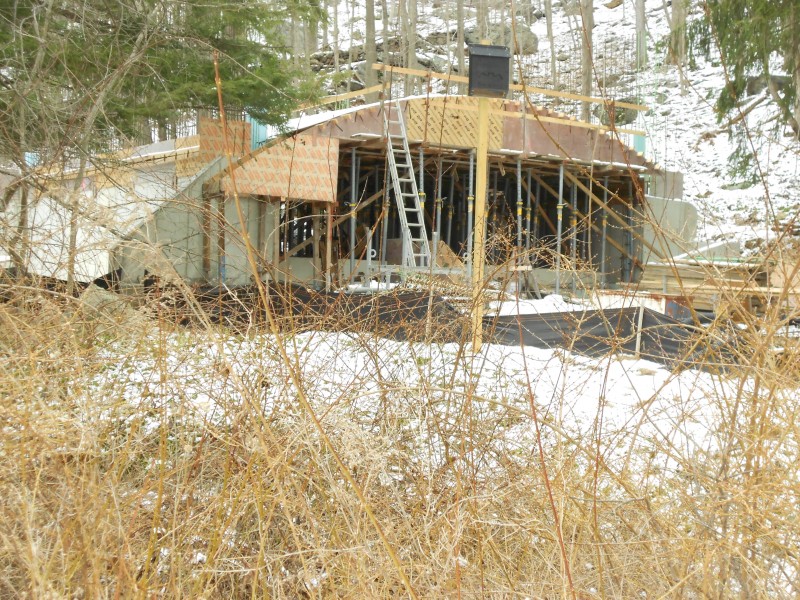 That’s all for this post and I apologize for getting to it so late. As Gandalf said, “I was delayed.”

Thanks for stopping by and don’t get off the NY State Thruway in a snowstorm! All exits lead to you know where!

2 thoughts on “A Quick Update….So Much For The Wooly Bears…Oh Yeah and I Found Out What Hell is Like!”